One Room Library and One Librarian- 1946

The Olympic Junior College hired a single librarian in 1946 and in the spring quarter of that first year, a single room was provided as a dedicated library space. Lorraine Carter, the Librarian, recorded the library budget as $5,000 annually from 1946-1950. The full story is available in the digitized volume "A History of the Olympic College Library from 1946-1977" by Lorraine Carter.

The roof of the library collapsed in a historic snowstorm December 1996. The process of recovering contents, condemning the portion of the collapsed building, working with architects and letting the bid out (twice) for the rebuilding took three and a half years. Because the eastern two-thirds of the building was utterly destroyed, the library for those years continued to function in the western remaining third of the building, in cramped, rearranged quarters, using the surviving circulating collection, one percent of the reference collection, and a few still-functioning computers. The balance of the library’s holdings, equipment, and surviving collection were housed, along with media services, in mobile homes, a Bremer Trust house, and stuffed into odd corners across campus. The new building, therefore, had to be completed in stages. Stage one was to rebuild the eastern portion, turning it into a three story library and a Student Entry and Advising Center (or SEAC) (became the Teaching and Learning Center in Fall 2010 after SEAC services moved to the new  HSS building). That portion of the building was opened on March 10, 2000. The old eastern third of the building was then gutted and rebuilt into the media center that opened August 8, 2000. 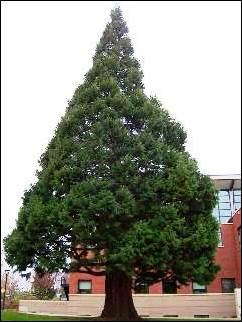 This big beautiful tree is a giant sequoia (Sequoiadendron giganteum): the tree with two lives. The big tree was planted in 1977 as part of the landscaping for the then new Learning Resources Center building. At that time the tree was between 6 feet and 7 feet tall. The tree was the same perfect cone shape that it is today except that its branches came all the way down to the ground. Word has it that lights were put on the tree every holiday season. In December of 1996 the roof of the Learning Resources Center building collapsed in a snowstorm and the building was destroyed. Much machinery and equipment came onsite to cleanup debris and then to build the new Haselwood Library. During this time the shallow roots of this lovely tree were trampled and the tree became stressed. (End of Life Number One).

The State Arborist was called in to "save the tree". The tree was "basal pruned" to remove weight and stabilize the tree. (If you look carefully at the tree from just the right angle you can see an indentation or jaggedness at a certain point in the tree which alters the perfect conical shape. This is the "stress line". The tree is doing well as of this writing in March 2012. (Success so far in Life Number Two). 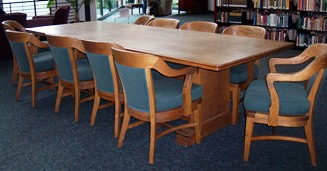 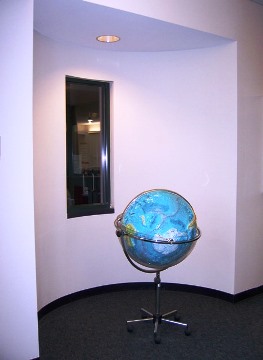